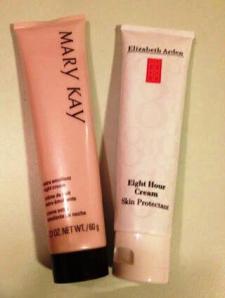 For as long as I can remember, my mother has always known how to cure what ails me. Bad dreams were soon forgotten by climbing into bed beside her. A scraped knee healed quickly with Neosporin, Band-aids and a kiss to make it better. Upset stomachs called for ginger ale and popsicles. And myriad skin woes, from sunburns to painfully dry skin, were soothed with her secret weapon: Mary Kay Extra Emollient Night Cream.

This cure-all cream has a cult-like following, amongst those who know of its existence. I’m shocked that it’s not mentioned more often in beauty magazines and by skin care gurus listing off their favorite products. Growing up I came to respect the bizarre, almost gelatinous pink “cream” as a gift from the heavens. The very worst sunburns of my life were nearly eradicated overnight thanks to a generous slathering of this heavily perfumed cream. And when I whimpered to my mother about my “dinosaur elbows,” which were so dry they turned an odd greenish color and looked semi-reptilian, she wisely suggested I smooth them with “the cream.” Worked like a charm. Oh, and you know those mid-winter days when it seems that the entire season’s worth of cold, wind and dehydration descend upon your poor fragile lips to the point where your entire face feels chapped? Nothing a little EENC can’t handle.

Yes, I’ve spent most of my life believing in the unparalleled power of Mary Kay’s night cream. Which is why I rolled my eyes whenever I saw that some socialite or beauty editor raved about the seemingly similar virtues of Elizabeth Arden Eight Hour Cream. If they only knew, I thought to myself. I was sure this one was all hype.

To give you a little background, legend has it that Eight Hour Cream got its name after a mom (much like mine) smoothed some of it onto the scraped knee of her child and found, eight hours later, that the knee was good as new. So when I spotted a tube of the stuff while perusing the clearance rack at my local TJ Maxx last week, I decided to give it a try. I figured, if nothing else, it would probably serve as a decent hand cream.

When I got it home and checked it out, I noticed that, like the Mary Kay cream, Eight Hour Cream is actually more of a gel. Where Mary Kay is pink and perfumed, Elizabeth Arden is yellowish and medicinal; it definitely didn’t win in the category of scent. It also isn’t quite as thick as the Extra Emollient Night Cream, having more of a slippery feel to it. While I was sure it would pale in comparison to my family favorite, I decided I wanted to give the new cream a fair shot, so I concocted a little experiment to test the effectiveness of the two creams against each other.

Spring may have finally arrived, but up until last week my end-of-winter cold was hanging on for dear life. Weeks of constant nose-blowing had left the skin around my nose red, raw and flaky. Not a good look. However, this gave me a perfect platform for testing the two classic creams. I smoothed one onto each nostril (and surrounding skin) and went to bed.

When I woke up I found that both sides were vastly improved, with one noticeably better than the other. In fact, that side was nearly 100 percent healed! Other than a little residual redness, it was completely back to normal: no raw, chapped, flaky skin in sight! The other side, while much better, still had a rough patch or two, and a little redness. There was a clear winner.

Can you guess which cream was which? As it turns out, Elizabeth Arden Eight Hour Cream truly did heal my skin within eight hours. I was shocked! I was certainly not expecting it to outperform my trusted Mary Kay night cream.

Eight Hour Cream may have won a place in my medicine cabinet, but that doesn’t mean I’m ready to turn my back on the Extra Emollient Night Cream. After all, my mother has sworn by it for years, and it has served her very well. And I have no idea how Eight Hour Cream works on a sunburn; the battle of the cult classic creams just might see a round two come summertime.

What I do know is that someday in the not-too-distant future, should I have a daughter of my own, I’ll have just the thing to cure what ails her. It’s something I got from my mother.

2 thoughts on “Skincare Showdown: Battle of the Cult Classic Creams”

Check back soon for must-have facial mists, a guide to quick and easy hair removal, fall makeup and more.