As I mentioned in my last post, my wonderful family surprised me with the Benefit Cosmetics advent calendar after Thanksgiving dinner last week. I always imagined that an advent calendar filled with miniature beauty products and pretty little trinkets would be amazing. Turns out, I was right. Each morning when I open a door on the calendar I feel a bit more like a princess. And so far, each day has revealed a better little gift! I can’t wait to see what the rest of the month holds. 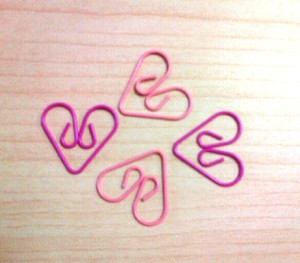 These adorable little paperclips brightened my office – and my day!

So, without further ado, let’s get into the good stuff – what I got! The advent calendar goodies started off on a somewhat underwhelming note when I opened the first door and found a set of four pink heart-shaped paperclips. Now don’t get me wrong, I love office supplies and under normal circumstances would be delighted by such a thing. But, having spent the last 11 months not shopping for makeup, I was more than a little excited by the prospect of getting a new product to try. So the sight of those adorable little paperclips on day one took a bit of wind out of my sails. However, I took them to work with me, where they brightened my office and totally made my day.

Starting on that less-than-thrilling note day one turned out to be brilliant, because when I opened the door on day two and found a mini tube of Benefit Ultra Plush Lip Gloss in A-Lister I actually squealed with glee. A-Lister is a light bubble-gum pink colored gloss, and is a lighter shade than I would typically pick out for myself, but I have to say that I’m quickly becoming obsessed with it! It’s super smooth and moisturizing, and gives lips a nice full appearance.

Pretty pink gloss and loads of mascara are the secret to winter pretty.

The magic continued this morning when the third door revealed a tube of They’re Real! mascara. As regular readers will know, this is one of my all-time favorite mascaras, and I used mine up earlier this year. Also, I’ve determined that gobs of mascara and pretty pink lip gloss is the secret to looking (and feeling) pretty on a cold and stormy December morning. Well played, advent calendar!

Check back soon for must-have facial mists, a guide to quick and easy hair removal, fall makeup and more.